Folks, the Colonel here. The democratic process is vital to the preservation of our Republic. Yesterday I learned that a candidate forum/debate event sponsored by “EmpowerU” scheduled for 24 February 2016 had been canceled due to a lack of interest by both establishment candidates: Senator Bill Beagle and Representative Tim Derickson. I am attaching the cancellation notification letter to this posting for your reference so you can see the source document.

Essentially in Sen. Beagle’s case it appears he was willing to participate but would have  sent a representative in his stead, which given the landscape of this race, is understandable due to numerous schedule conflicts. I, myself, have been unable to attend every function that I have been invited to but I attend most events and will continue to strive for maximum participation until election day.

In the case of Representative Derickson, the letter conveys Mr. Derickson’s complete lack of interest in wishing to debate, discuss or participate in this event whatsoever. You can read the letter yourself. There is at least one typo whereby the author refers to Mr. Derickson as Senator perhaps confusing his office/title with that of State Senator Beagle’s. In any event I am disappointed by EmpowerU’s decision to cancel this event as it would have provided the public a keen opportunity to examine all the candidates on substance at one place in a direct democratic forum. Based on the tenor of this letter I conclude the Derickson Campaign calculus is that they don’t wish to expose the presumptive front runner to this kind of cross-examination as he has nothing to gain and much to lose. This is my opinion; you can reach your own conclusion from reading the letter.

If a candidate signals weakness and timidity in a primary election-cycle how can he or she be the best person to represent us, the people, of Ohio’s 8th Congressional District? I have taken bold, clear stands on every issue and every question put to me in this campaign; the people deserve to know what the candidates think and what they are made of.

This cancellation notice smells funny to me; it seems to convey a lack of courage to face the people and other candidates on the issues. This is establishment politics at work. You know it, I know it and the American people know it! I am running a clean campaign based on the issues but I believe in accountability and cannot let this pass. Every candidate should be vetted and examined under public scrutiny in order to provide the voter with the information he or she needs to make the best choice possible on election day. In fairness I will state that both establishment candidates have been present to most of the “meet the candidate” events that I have attended and they have answered questions as have all of us. This letter, however, indicates this trend may stop because of unfavorable outcomes real or perceived by the front-runner candidates and their campaigns.

My proposals are based on principles and I, more than any candidate, have displayed bold leadership throughout this campaign. You know where I stand because I post all my proposals on “www.kevinwhiteforcongress.com” and I address your questions with specific answers. Without a vision people perish, the Bible says. I believe in American Exceptionalism. I am running to represent you, the people of southwest Ohio, and to offer my experience and my abilities as a proven leader to help restore our nation to her rightful place as mankind’s best hope for freedom loving persons the world over. I am the only combat veteran in this race and as such I do not take kindly to political manipulation on display anywhere, anytime from anyone; I consider it cowardly and unacceptable. I invite you to take a stand with me, Kevin F. White, and exercise your vote with boldness on 15 March 2016. Business as usual, such as has been conveyed by this letter, is no way to run a business at all and must stop if we are going to make America great again. Facts are facts and these facts must change and change now. I mean no disrespect for Mr. Derickson or any other candidate but I will not standby and allow manipulation, perceived or real, such as this stand. Thank you for listening and please remember to exercise your right to vote on 15 March 2016. Vote Life, Liberty & Freedom….Vote Kevin F. White for Congress Ohio District 8. God bless each and everyone and may God bless the United States of America. 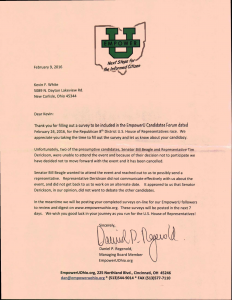